History - Then and Now 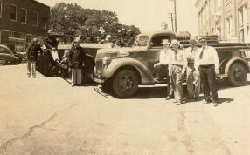 Chief Fleenor had to unhitch his team of horses from his delivery wagon and hitch to the fire wagon if there was a fire in the town. It is said that after a fire, he would sometimes leave the fire wagon at the scene, as there was no place to actually house it. Chief Fleenor's horses were used for the fire wagon until they were lost when his livery stable caught fire in 1915 due to spontaneous combustion.


Some of the early records from the Oklahoma State Firefighter's Pension System show that in 1921 the SSFD had one paid firefighter (Chief C.G. Stricklen) with nine on-call firefighters. These firefighters were not employed by the city. Instead, they were paid for each of their responses when fire alarms came in.


A second fire station was built around 1970 to protect the southern Sand Springs area commonly referred to as Prattville.  In 1981 a new building was erected for Station 1. The original Station 1 was torn down and now the land is the alley between City Hall and the current Station 1.  Planning and Design work is underway to replace both of these stations.

Since 2004 the authorized strength of the fire department is three companies responding out of two fire stations, with an administrative staff of three including the Fire Chief, Deputy Fire Chief, and Fire Marshal. In a historic move, Fire Department Administration was relocated into a former attorney's office at 108 East Broadway Street in 2004, as well.  Thus, the fire chief's office was located outside of the central fire station for the first time in 90 years.

Leaders Through the Years
SSFD is now led by Fire Chief Mike Wood, who was hired as a firefighter in December 1996. Mike promoted through the ranks serving as Captain for 11 years before promoting to Deputy Fire Chief in March 2009. Chief Wood assumed the responsibilities of Interim Chief in January of 2011 and became Fire Chief August 2011. Prior to joining the Sand Springs Fire Department, Mike was a firefighter for the Okmulgee County communities of Liberty and Beggs. He received his education from Northeastern Oklahoma A&M College in Miami after graduating from Beggs High School. Mike is a Nationally Registered AEMT, IFSAC Certified Haz-Mat Technician, and a founding member of Oklahoma Task Force One.  Mike is married to Debra Wood, who is also employed at City of Sand Springs; they have three children -  Kristen, Greg, and Aaron.

A History of Fire Chiefs